In 2005, when Amend began, we were a lean unit, scraping together resources. Back then, we relied on the dedication and talents of close friends and collaborators to build and convey our mission to local communities and the world. Today, we still run a lean operation but with five country offices and nearly 20 full-time staff. We’ve also managed to convey our mission near and far, thanks in great part to one of those close friend-collaborators who was there at the beginning, filmmaker Alexander Berberich.

Alex films and produces Amend’s videos. These videos show what we do — which can be a challenge. It’s not always easy to express the scope of our work to the many audiences we need to reach around Africa and the globe. We specialize in research, data development, and evidence collection — behind-the-scenes stuff. The infrastructure we build is highly efficient and effective, not grand. We emphasize prevention, measuring our success in injuries and deaths avoided, not witnessed. Little of this is visually thrilling.

Fortunately, we have Alex.

From the start, Alex understood our mission and work. He shares our devotion to saving lives. Through his videos, he’s able to distill both our meticulous methods and our passion. Most important, he also gets to know the communities where we work — the schoolchildren, the teachers, the families, the leaders, the workers — and makes them, who are the heart of our work, the heart of his videos. 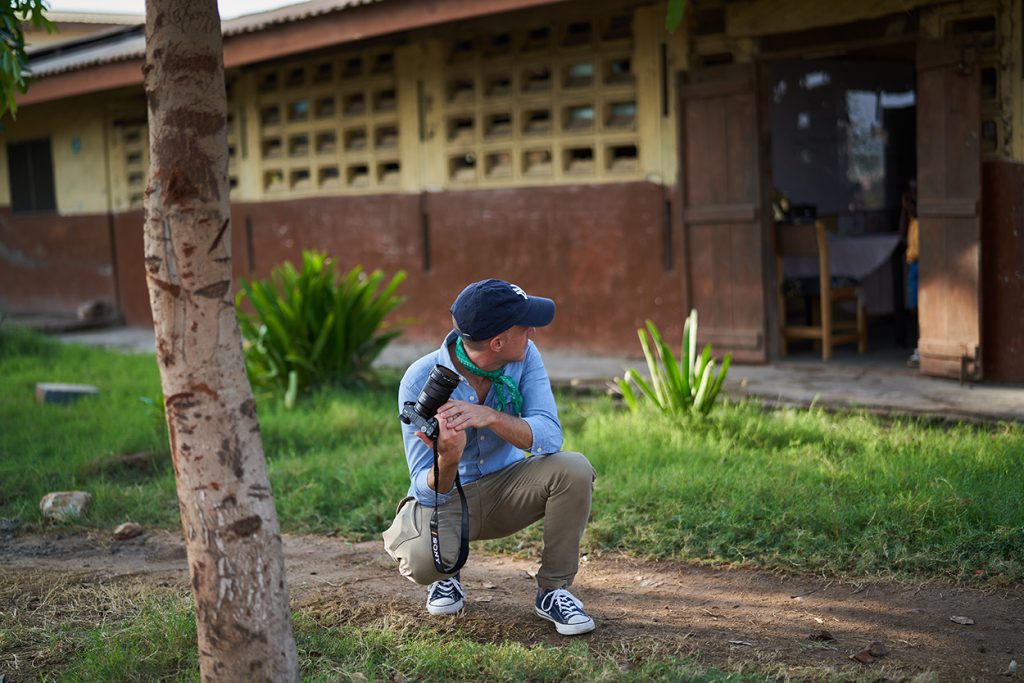 So let’s get to know Alex.

Alex was born in New York City. His parents were involved in theater, and he followed suit, from childhood onward. After college, he started working in film production, including large Hollywood, art house, and independent projects alike. All the while, he involved himself ever more deeply with volunteer and community-service organizations, working on behalf of, among others, the homeless and children with AIDS. Shortly after a trip he took to Zambia for a UN World Food Program project, he met our founder Jeffrey, who at the time was just getting Amend off the ground.

Alex immediately wanted to join the effort. And he did, even though he wasn’t quite equipped. “The first Amend video I shot was during the original trip Jeffrey and I took to Uganda. I didn’t even have a camera yet,” he says. “I borrowed one, without proper permission, from the IFC [where he was studying in New York]. I told them, ‘I promise you’ll get it back safe.’” He did return the camera — and got his own and has been filming for Amend ever since.

Alex’s first formal video for Amend was titled simply “Amend” and outlines our early Be Seen, Be Safe initiative, through brief interview excerpts interspersed with footage from around Accra, Ghana. From there, as our work has evolved, so have Alex’s efforts to document it.

Alex says that he learned early on to avoid a common tendency to assume that “we need to get dramatic videos of kids in hospitals” to emphasize the work’s gravity. “Over time,” he says, “we understood that we need to capture the work on the ground — to witness what Amend is doing, and the importance of it.”

So that’s what he did, and in 2018 and 2019, he shot and produced a FedEx-supported series of short videos documenting Amend’s School Area Road Safety Assessments and Improvements (SARSAI) projects with the Child Health Initiative at Justin Kabwe Primary School in Lusaka, Zambia, (2018) and Bophirima Primary School in Gaborone, Botswana, (2019) as well as a Safe Schools Speed Zones initiative for 30 km/hr in Windhoek, Namibia (2019). The Lusaka film won the Jury prize at the African Road Safety Film Festival, in Marrakech, Morocco.

Have a look at the videos, and you’ll witness Alex’s exuberant and intimate details, set to rousing music (music videos are his favorite format). He condenses a great expanse of information and sensation into about one and a half minutes. “I pretty much am at the school the entire time. So I get to witness the transformation in real time,” he says. “There are numerous times I don’t think the work will be complete by the time we do the ribbon cutting. I am always wrong — somehow, it gets done. I will leave at dusk and not think the painting of the zebra crossings will happen overnight, and they do.”

He gets to know everyone onsite. “I become quite friendly with the contractors working on the infrastructure,” he says. “It varies from school to school and country to country. I remember, at one school in Zambia, a proud father was there one weekend helping to paint. He was volunteering. He had attended the same school as his child. Even if they are getting paid, the workers are very proud and extremely grateful that someone cares about their children. On the fun side of things, they also usually want photos and videos of themselves that I end up WhatsApping them later on that day, when I am back at hotel or apartment. My WhatsApp is teaming with engineers, painters, masons, etc. from all over Africa who are now proud to have an American friend sending them photos that they can send their friends and post on Facebook.”

In early 2020, Alex shot the FIA-Foundation supported video “Kids of Oblogo,” at a school in Accra, where several children had been killed by vehicles during the prior year. Amend had recently installed SARSAI infrastructure there to help protect children walking to and from the school and playing on its grounds. A few weeks after the installation was complete, a truck and automobile collided on a nearby hill. The passengers were killed. Alex says: “The truck would have taken out a playground full of kids at the bottom of the hill. Had Amend not installed a barrier, multiple children would have died.” He pauses. “A truck was stopped by Amend’s work.”

While filming “Kids of Oblogo,” Alex decided to further shift his approach. He was always interested in hearing the children’s and communities’ stories, but this time he decided to let them tell it, bringing him further in a direction that he was already headed. “I do all of the interviews,” he explains. “Moving forward, there are a lot of different stories I want to tell, as they relate to the children and Amend. How those become a reality will always depend on the circumstances around the school, the children themselves, and how things unfold. Previously, the emphasis was on showing Amend’s work as it relates to the children. I would like to shift to showing more about the children, and how Amend’s work is incorporated into their lives. For example, in that video, you hear the dreams of the children and what they want to be when they grow up … provided they don’t get hit by a car on the way to school.”

Later in 2020, Alex produced the FIAF and CHI–supported “Amend: Saving Lives Across Africa,” which provides a visual primer of Amend’s SARSAI projects in six countries across Sub-Saharan Africa. By this point, the pandemic had spread around the world, and the video concludes with a message: “This is a vaccine we have right now.”

Most recently, Alex completed another FIAF-supported video in Accra, covering the completion of SARSAI work around the Oblogo schools. It features Zoleka Mandela, CHI’s global ambassador and friend of Amend, standing near where two young sisters were killed by a vehicle. “That’s the reality,” she says, “not just of Ghana but the reality of our region.” Of the encounter Alex notes: “It was absolutely amazing to meet Zoleka. Highlight of the trip for me. I edited a small video together for her foundation as well. She is super elegant and charismatic.” Later in the video, Zoleka says, “It warms my heart to know that something can be done.”

As the curtain rises on 2021, Amend continues to get things done to save lives, and Alex continues to document our work. And we are grateful for our talented, visionary friend who’s stuck with us for fifteen years and counting, casting a deep and bright light into what we do.

Pandemic lockdowns and travel restrictions around the world have presented a unique opportunity to examine...